"The rescue" is the story about the adventures that did lead to the homecoming of our C119 N1394N after 13 years and 5 month sitting in agony.

The airplane was forced to land due to an engine failure in Port Lions, Kodiak archipelago, Alaska in the july of 1989. The company could not afford a new engine back then, so the plane was stuck.

Now with a combined efford it was possible to fly it home, after putting in two new engines and new instruments, plus a lot of new system parts. It took half a year. 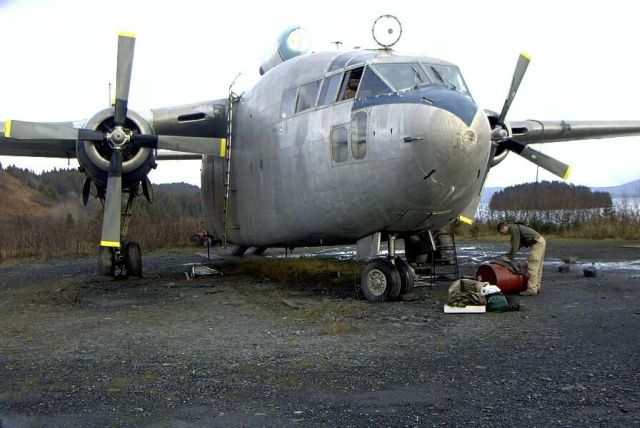 C119 N1394N where it sat for 13 years, 5 month. The parking spot on the Port Lions airstrip is on top of a cliff, with the wingtip over the sea! The plane suffered mostly due to vandalism and theft. The corosion was not a big issue, due to the very frequent rains of Kodiak and the general low temperatures. Salt spray from the shoreline seldom got to the plane, and when, it got washed off soon. 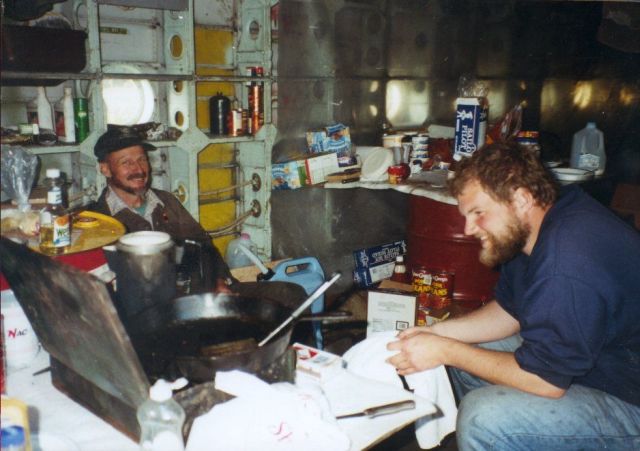 Over the years the plane was visited by the owner and his friends repeatedly, everytime work and money did allow it (OK, sometimes it wasn't, but they went anyway). To save funding, it was always camping in the plane, there is certainly enough space! Living as bare essentials, fighting the weather (all (excluding the very last one) trips were in winter or late autumn!) and under siege by the infamous bears, it was a real adventure, as one can see! 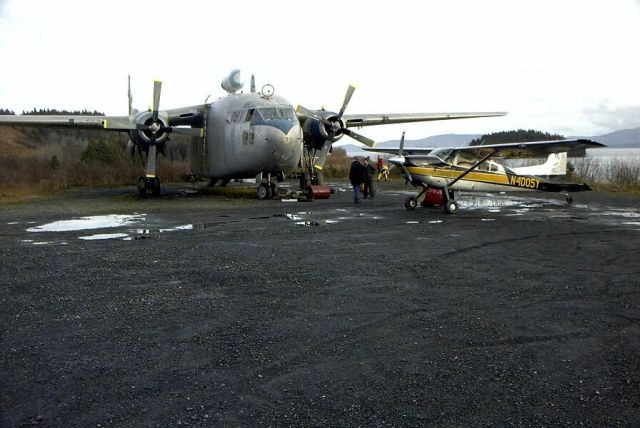 Before the rebuild on site was finished, the ferry service (thanks god there was a ferry service!) to Port Lions ended, so the owner had to work without a vehicle to finish up the plane, alone! The fuel for the first leg of the way home, had to be ferried in by air, with the C185 of our friend Lee Wareham. 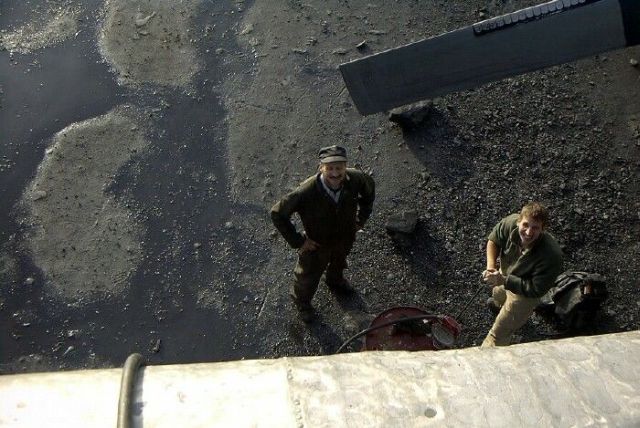 Blessed by good weather, the fueling was done in one day, with many trips of the C185 to the Kodiak state airport. The fuel was siphoned out of the tanks in the C185, into drums, and then handpumped by the flightcrew into the wingtanks of the Boxcar. During the final stages of th restoration high winds theathend to blow the plane away and even with brakes on, and plenty of chocks, it was moved about two feet by the storm in one night! The owner John Reffett came close to firing up the engines, to taxi into the wind, to save the critical situation. 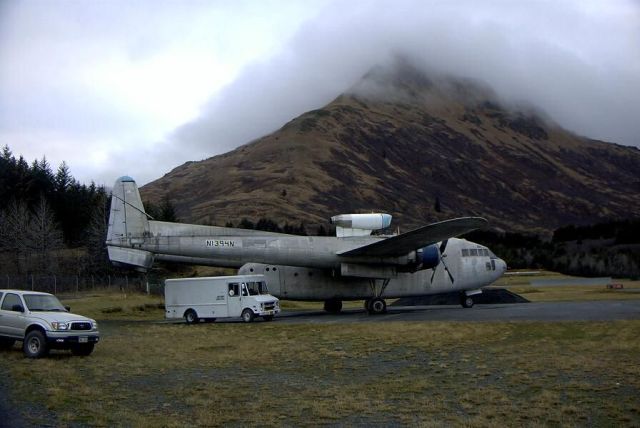 The first leg of the long way home completed, the C119 rests at the Kodiak state airport, here with Barometer Mountain in the background. The white stepvan is the self propelled company toolbox, it served well in Port Lions, too. (No, we didn't dare to transport it in the airplane!) 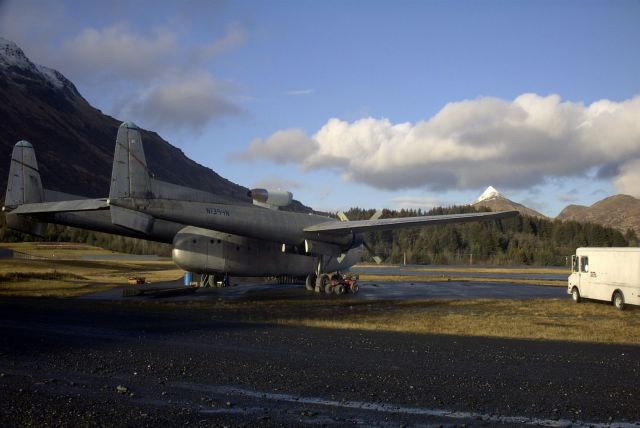 With a Piper Twin Comanche as chaseplane (that very barely could catch up) the Boxcar made his way home and completed a long overdue voyage, at its new home in Palmer it was met by its friends and two TV-station crews, that took footage of the historic event, that even made the two evening news in Alaska! The 3 flights of N1394N in 2002 where executed by Capt. Roger Bartels, Capt. Alex Roesch (co-pilot) and Flight Engineer John Reffett. 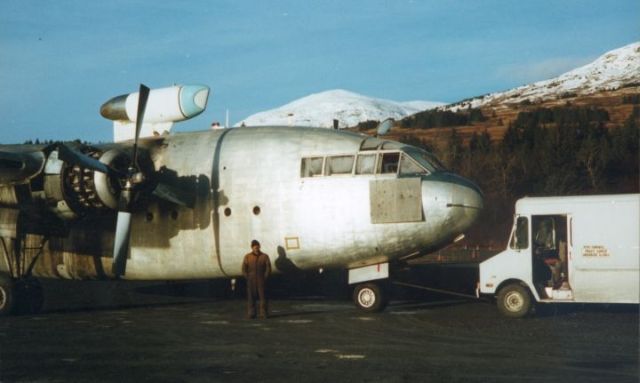 The harsh way it was: In 1992; 1994; 1996; 2000 severeal attempts were made, about every year, to help N1394N get home, or repair mostly vandalism damage. All these trips were in the winter or very late autumn, always with camping in the plane! This is Lars Dahl Junior in front of it, with a very rare moment of blue skys... 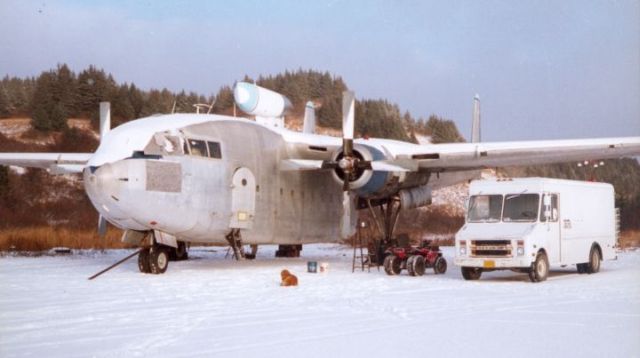 It was always cold days, short times of light, wet-cold nights, snowstroms and not a way around to get out to Kodiak in the spring or summertime. Summertime was time for money-making, it could not be spend with working on a plane that didn't make money. To take the time, sacrifice a whole summer, that may have finally made the difference to get the plane home.(OK, some money issue was involved, too!) The fact that Port Lions has ferry service (not right now, now the ferry took 5 month off!), made the whole thing of "the Rescue" possible, since with the ferry the "self propelled toolbox" and the spare engine could be brought in.... 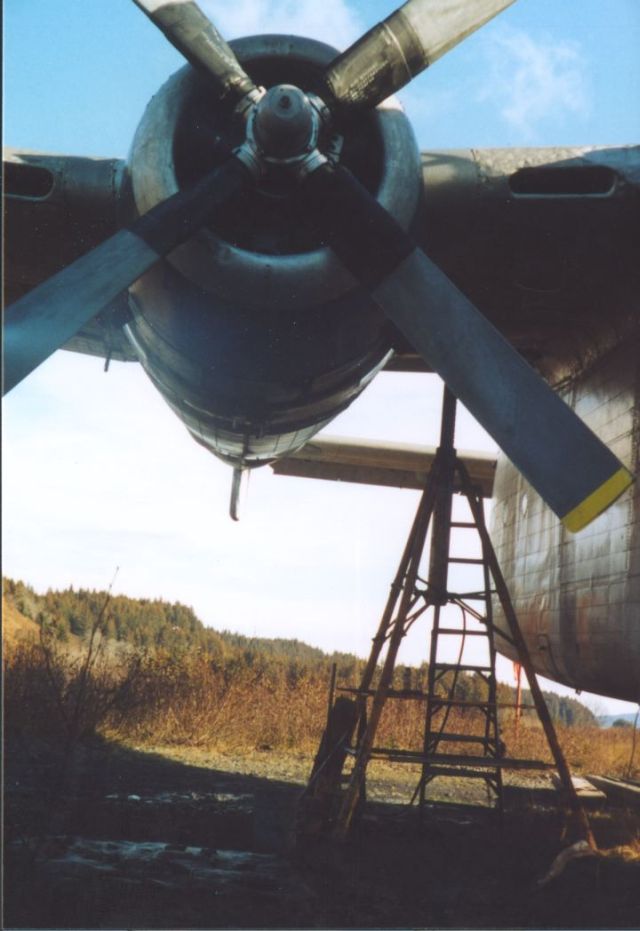 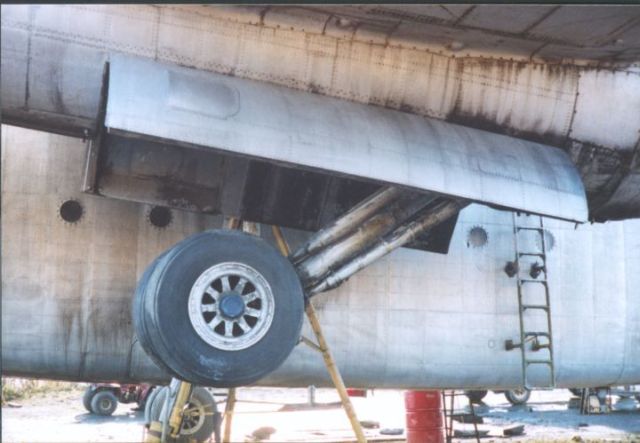 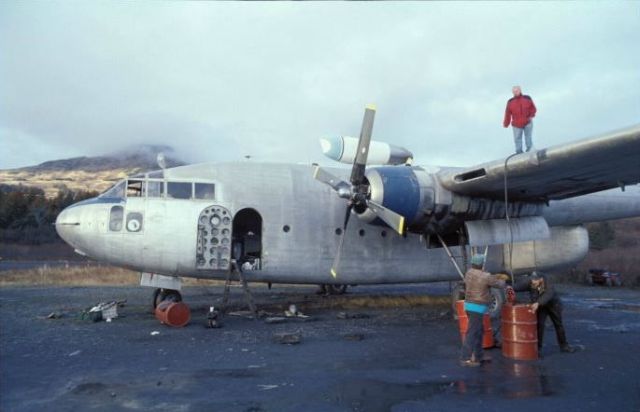 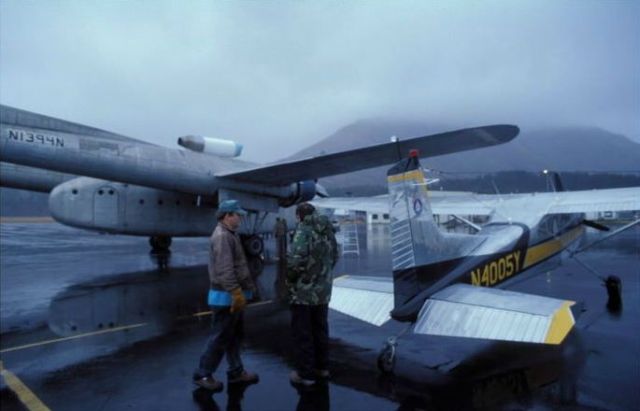 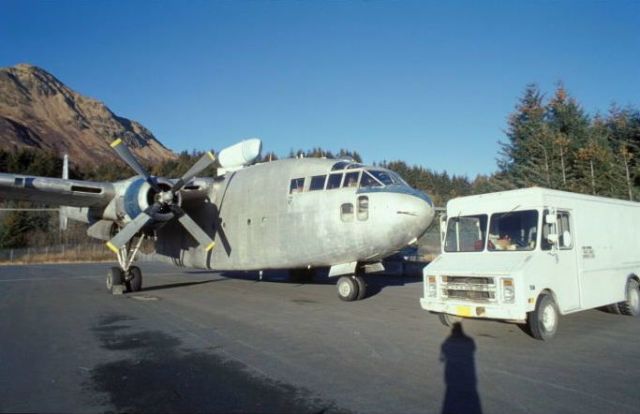 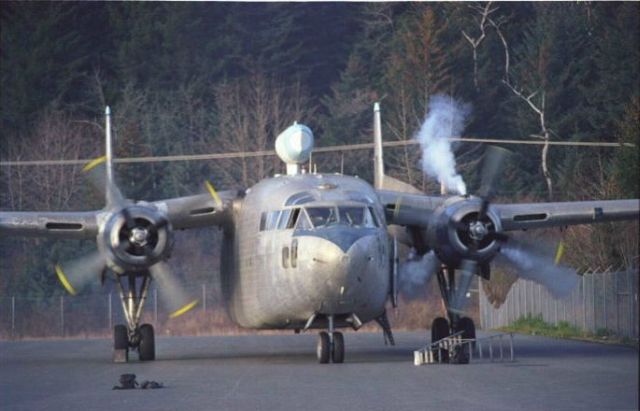 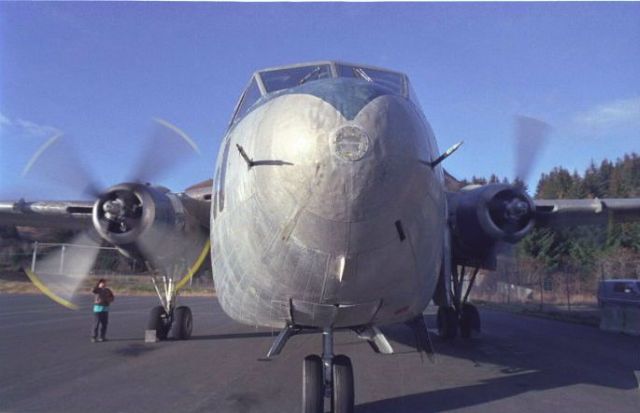 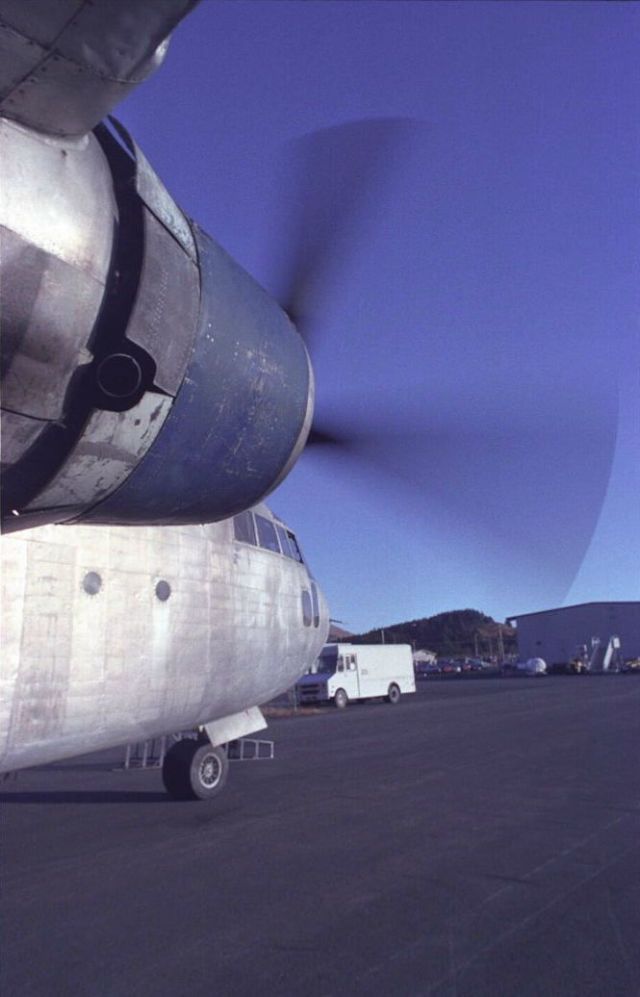 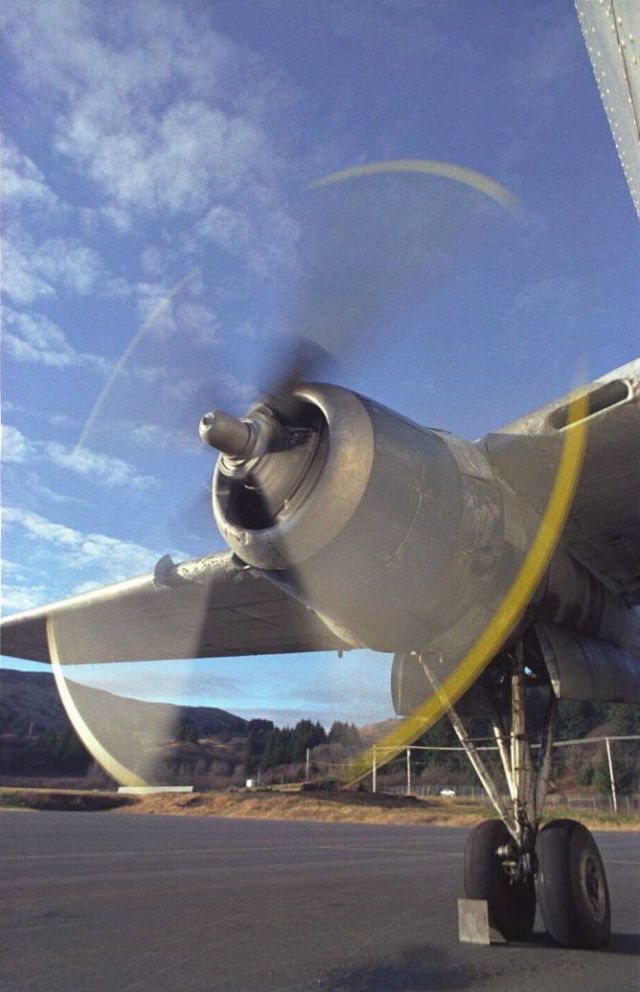 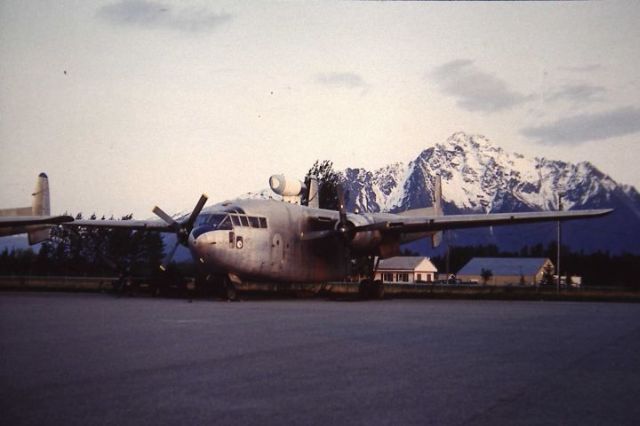 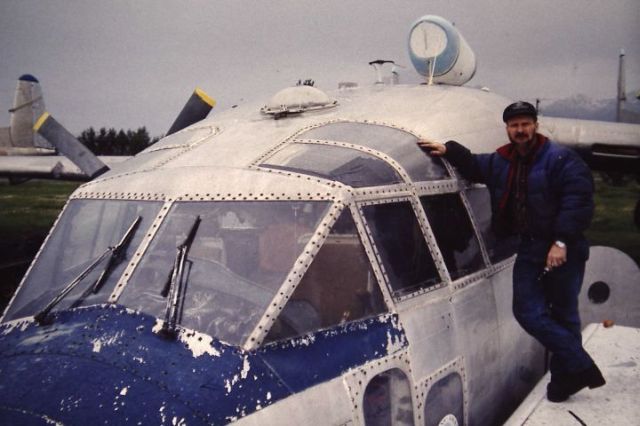 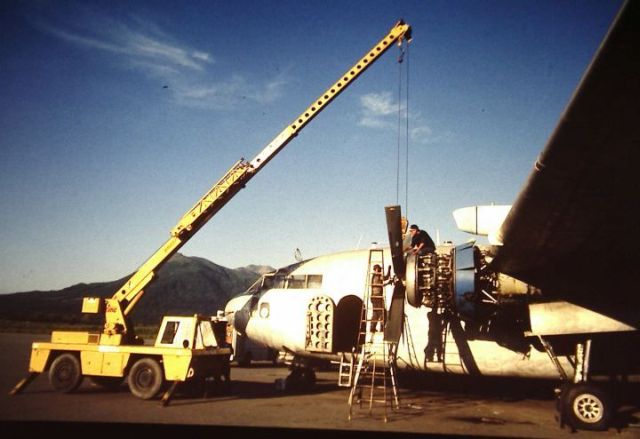 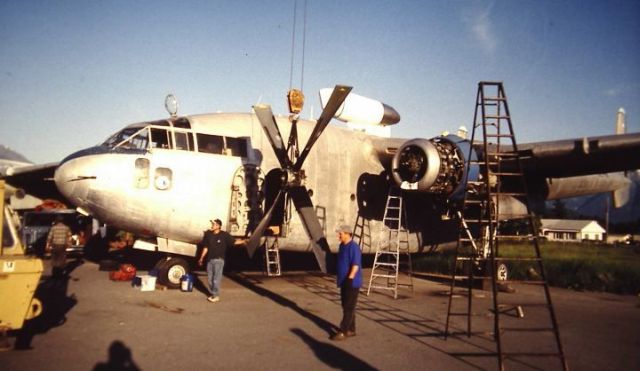 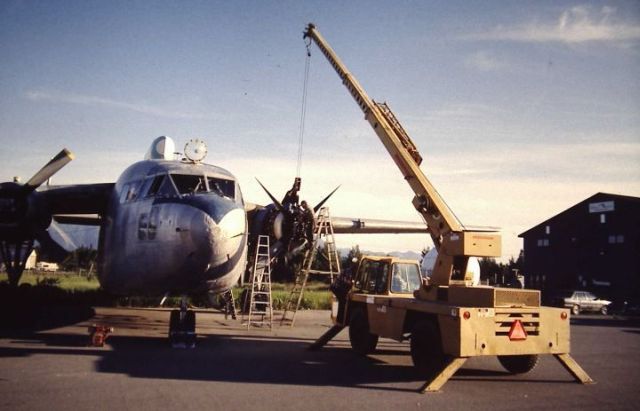 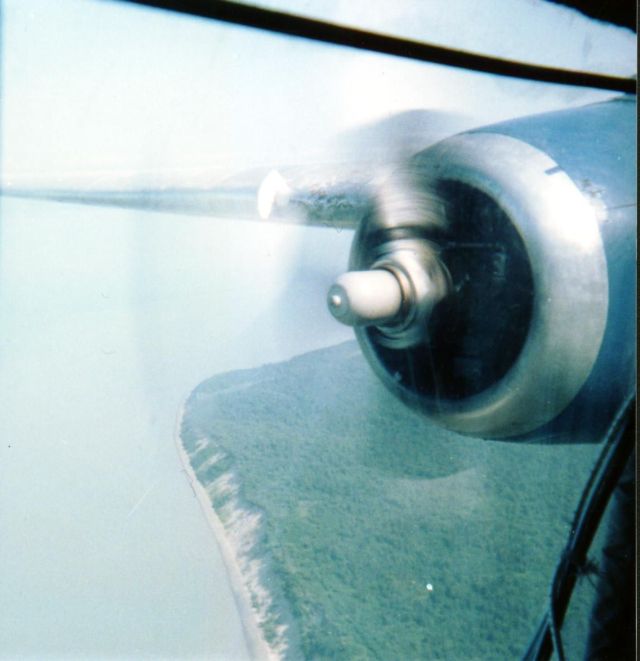